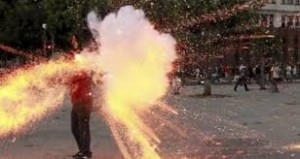 Santiago Andrade, cameraman of the Band channel, is in a critical condition after be wounded by an explosive device Thursday while covering the clashes in Rio de Janeiro by the increase of the price of transport of 2.75 ($ 1.15) to 3 reals ($ 1.25) and which shall remain in force from today.

According to the Band, it is unknown if the appliance was released by the police or the protesters. It is not known if it is a tear gas or a home-made bomb.

Andrade was taken to the hospital Souza Aguiar, where he underwent a four-hour operation, but his condition is serious, according to medical sources.

Local media reported that the demonstration ended with seven wounded, including Andrade, and 28 detainees, but the figure was not confirmed by the Civil Police of Rio de Janeiro.

The Brazilian investigative journalism Association (Abraji) condemned the attack and recalled that so far this year three journalists were attacked in claims, including the photographer of EFE, Sebastio Moreira, in São Paulo.

Acceptance of Pope Francisco is majority in Latin America