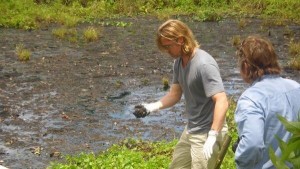 With the online campaign ,“Brad do the right thing,” Ecuador seeks to collect signatures and reach the American actor Brad Pitt so he does not make a movie based on a book, whose rights were acquired by him, and which recounts the alleged fraud against Chevron in a lawsuit for environmental damage in the Amazon jungle of Ecuador.

Through the requests´ website change.org signatures are collected for the #BradDoTheRightThing campaign, and an “Open Letter” is also shown, which asks the actor to not film or make use of the rights acquired by his production company of the book “The law of the jungle,” by journalist Paul Barrett.

The letter says: “Brad, We invite you to do the right thing. We invite you to keep the rights of this book – a fiction that has the potential to do so much damage because of the lies and  misinformation that it propagates. And we invite you to do nothing with those rights. Do not produce a movie with this book but don’t allow others the chance to do so either.” Brad Pitt visited Ecuador in 2012 and witnessed the damage caused by Chevron in the Amazon.