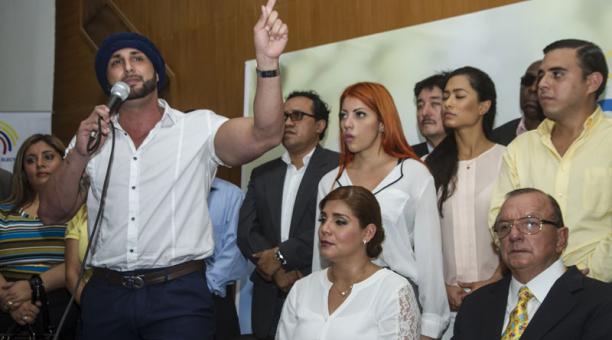 The candidates for legislators in Guayas of the Adelante Ecuatoriano Adelante (AEA) party broke the silence before the critics. They refused to be “demonized” by having participated in realities such as ‘Calle 7,’ ‘Combate,’ or to television hosts.

They said they would seek to reach the Assembly to legislate and oversee, and that they are qualified to occupy that position. These statements were made during the registration of their candidacies the afternoon of Thursday, November 17, in the Electoral Delegation of Guayas, in the north of Guayaquil. Thus, Edder Calderon, aka ‘The Rock,’ who participated in the reality show Calle 7 of TC MiCanal, will represent District one (Ximena and Tarqui areas). District Two (Pascuales and Tarqui Popular areas) will be represented by Sofia Caiche, TV host and actress of ‘Mi recinto’ television show.

Meanwhile, District three (central areas of Guayaquil and the Samborondon, Duran and Playas counties) will be represented by Isis Zurita, who participated the in ‘Combate’ reality show. And District four (21 counties of Guayas) will be represented by Jorge Heredia, host of the ‘Vamos con Todo’ show. They arrived at the Hall of Democracy accompanied by the party leader Alvaro Noboa and national director Sylka Sanchez.

Prior to the registration, Sanchez addressed the sympathizers and the media. She dismissed the questions to the candidates and affirmed that they are qualified because “they are prepared, honest people and not corrupt,” and they will give “the great surprise” in the upcoming elections. She added that the party leadership has met with the candidates to analyze the campaign proposals that will focus on legislation and oversight. Noboa assured that the candidate’s lists were made “with great care” and that they differ from the traditional parties.

“The dogs are barking because they know that with these entrepreneurs, these actors, with these professionals, we are the ones who are going to win these elections against their corrupt politicians.”
Meanwhile, Jorge Heredia, in a soft tone, said that his campaign would be based on seven axes outlined by Noboa. Among them, he cited the generation of employment, health, security and drug eradication. He downplayed the criticism against him for being known as a television personality and reminded that he is a social communicator.
“I am new to politics, we are young people prepared, we are young people transparent, we are adhering to a law that gives us the right to choose and to be elected, we are fulfilling the requirements to be candidates, that does not stain us, the fact that we work on TV, which is a decent job.” Meanwhile, Sofia Caiche said that the comments do not weaken them.
“All what they say are fallacies, they can speak as much as they, I will work as I always do: mine is an ant work.” Edder Calderon stated that the critics are “helping them to improve,” and stressed that thanks to their jobs on television they know “the reality of people.” “Among my proposals is the repeal of the Law on portability and consumption of drugs,” he stressed.