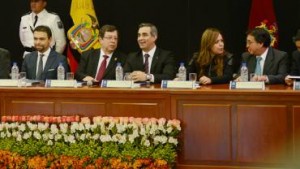 Carlos Ramirez left open the possibility of running to a third term of the National Court of Justice (CNJ), who said that “the 21 judges of the court have the right and are qualified to hold the office.” Similarly the highest authority of the Judicial Council, Gustavo Jalkh, said that Ramirez has no legal impediments to direct the organism.

In the same way they also answered the questions formulated by lawyers in private practice, who claimed that Ramirez’s reelection is not foreseen in the legislation and therefore he can not opt again for that position, since his functions last for three years.

To these criticisms the Assemblyman Andrés Páez (CREO) added, who publicly said he was “surprised” by the qualification of 99.10 / 100 of the current president of the CNJ . He reached that rate despite he supposedly “has thirteen advisers and has not shipped a single sentence,” said Páez.