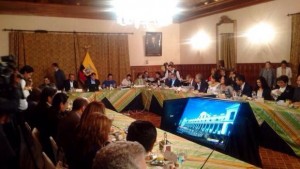 The government party, Alianza País, will respond to the concentrations against the Government with information and organization.

Yesterday they met at the last minute in the Government Palace, to analyze and monitor these protests, called by the Vice President Jorge Glas. Ministers, Assembly members, councillors of Quito, who concluded that the public should be informed about the redistribution of wealth bill were present.
“We invite and have tried a strategy so during the month that this bill is passed (in the Assembly) people understand the concept of equality of this proposal,” said Doris Soliz, executive secretary of AP at the end of the meeting.

Protests in favor and against the regime