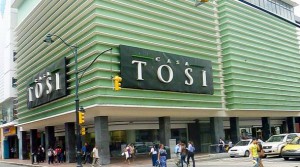 Casa Tosi surrendered two of its buildings to the Bank of Pichincha to cancel the debt with the financial institution.

The administrative building of the company, located in Guayaquil´s downtown, and the store located in the Iñaquito mall, in the capital city, were the granted goods, according to Carlos Espinoza, liquidator of the Territorial Bank and the responsible of the 92% of the shares of the company.

With the transfer of these trust debt properties, the debt that reached USD 19 million was canceled, said Espinoza.

The store located in Policentro will be sold in an open contest and will serve to pay the debt that the department stores company kept with the Territorial Bank in liquidation. According to Espinoza, the selling process will start next week and publications in the media will be done during the first phase.

The company closed its doors on March 31 and April 25, after that, it began to sell its merchandise with discounts. The inventory balances selling will possibly end this week and “Casa Tosi will finally close its doors,” according to Espinoza.

He added that the estimated value for the sale is $ 14 million dollars and it will only be accepted deals from a 10% less than that value.