Castelló ensures that the Magisterium Fund has no state resources 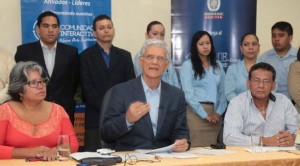 “The Fund will not be managed by the Biess because we have no state resources,” said on September 26 Juan José Castelló, Executive President of the Ecuadorian Unemployment Magisterium (FCME for its Spanish acronym). This, in reference to the approved law, on second debate, by the Assembly.

With 87 votes in favor, of 114, the Plenary approved a law that seeks to transfer 54 supplementary private pension and severance funds to the Biess.

Castello said that this law refers to 95% to the funds that will be administered by the Biess because they have state contributions and insisted that the FCME have not received these contributions and that gives them a “breathing space.”

He also noted that the approved law by the Assembly leaves a “very limited” normative for funds that have not received public funds and, according to recent information from the Superintendency of Banks, these would be 11.