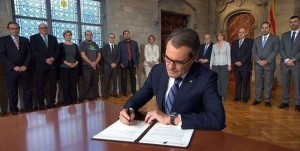 The President of the Generalitat Artur Mas signed on September 17 a decree of calling for the independence referendum on November 9, although the Government of Spain confirmed it will suspended it.

At 10:30 am, a timely, solemn and ceremonial in the Verge Montserrat Hall Palau de la Generalitat, Artur Mas, members of his government and parties y giving consent to conclude the independence consultation were formalized with the corresponding signature of the President, the announcement of the referendum.

In response to the signature and the words of President Artur Mas, the Vice President of the Spanish Government, Soraya Sáenz de Santamaría, made clear the position of the State and the measures to be taken in the coming days: “The referendum is not going to celebrate because it is unconstitutional. Any government is above the sovereign state, no one is above the sovereign of all Spaniards. “

Confirms marriage between George Clooney and Amal Alamuddin in Venice