Catalonia Parliament has an Ecuadorian Candidate 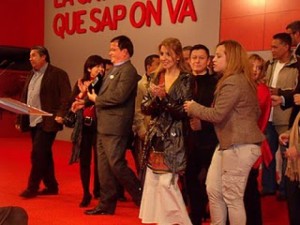 Ivonne Cabrera Moreira is in the 49 place on the list presented by the Partido Socialista (Socialist Party) for the elections of Catalonia in November 28. This announcement earned much attention, since Ivonne Cabrera is an immigrant that arrived to Spain over ten years. She was born in the Babahoyo province 43 years ago, and her inclusion on the list is perceived as a support for the Ecuadorian immigrants since they represent a large number in Catalonia with 80 thousand members.

“I’m here to demand equality of opportunity and freedom, while working on the project of Jose Mantilla so it wins (Mantilla is the current president of Catalonia and he postulated for reelection),” stated Cabrera last week during her official candidature for the Catalonia Parliament.

Cabrera asked her compatriots with the right of voting to make it count on November 28. In Spain voting is not mandatory. During the presentation, the Ecuadorian Consul, Lucia Pazmiño gave a speech that pointed out the courage of the Ecuadorian women, because she was the one that started the migratory process to Spain.

Ahmadinejad “USA Has No Right to Criticize Iran”