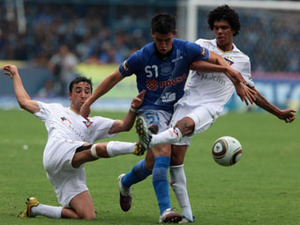 The Saints won 1-0 at El Nacional and Emelec, the blue team reached a goalless draw with Liga de Quito. With these results, the first absolute leader with 28 points, followed by the 26 of the blue team. Independent, defeated Barcelona 3-0 is third with 23 points.

Catholic University struggled to beat El Nacional in a close game that was decided only 80 minutes on a goal by the defense Camarata Cangá.

Meanwhile, Emelec once again played with discipline in their field with a full stadium, but could not score not even with a penalty shot, Enner Valencia missed a goal from eleven steps, and did not took advantage that Liga de Quito ended up playing with two less players for expulsion.

In another match played yesterday, Macara drew 1-1 with Deportivo Cuenca. Today will play Manta and Quito and suspended the match between Liga de Loja and Deportivo Quevedo.

The next game will be played this week and the championship is adjourned to allow the selection matches for qualifying to the World Cup Brazil 2014.