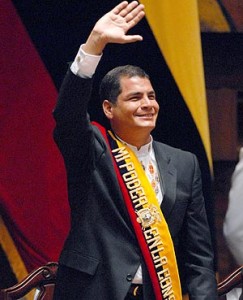 Ecuador’s Constitutional Court approved on Tuesday night,
although with modifications, President Rafael Correa’s proposal for referendum to reform the judicial system and limit the investment in banking and media.

“The amendments of the Constitution have green light and the President must take the final decision,” told to the medias Patricio Pazmiño, chief of the organism.

At the same meeting, the full court approved Correa’s proposal to submit to referendum a ban on shows where animals die, like bullfighting or cockfighting, and gambling; however it is necessary to change the words of the questions to avoid emotional language.

In the nearly eight-hour session, the judges rejected the report by Judge Nina Pacari, which considered the proposed amendments in four of the five questions should be handled by a Constituent Assembly and not via referendum.

Instead, the plenary approved by six votes to three, an alternative report of Judge Patricio Herrera, but the purpose of this judge was not released immediately.

Now the government must decide if it is acceptable the proposal adopted by the Constitutional Court, and if that happens it has to give green light to the Electoral Tribunal, which will be responsible for organizing the consultation.

Mubarak is Safely with Family

Ecuadorian Referendum would be in May