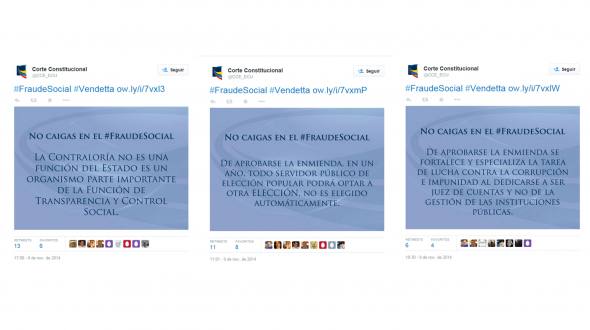 Under the motto “Do not fall into the social fraud,” the Constitutional Court (CC) promotes on its Twitter account several constitutional amendments proposed by Alianza PAIS (AP), in which a favorable opinion was ruled, except for protective action a few days ago.

The CC has used since Friday November 7 the #Vendetta and #FraudeSocial hashtags in the tweets on this subject. “The reform of the Constitution through the amendment is a legitimate route approved by the constituent and can not be delegitimized,” says one of the publications and it continued on Saturday explaining the benefits of some amendments in other tweets.

On November 10 it made other references to indefinite reelection, saying that the court “does not reelect the official” nor the employee is automatically re-elected, but rather the vote of the citizens and that, in the case of public workers, are not being infringed because the provision applies to those entering the public sector after the approval of the amendment.

Royalty payments of the telephone companies would only fall on Claro