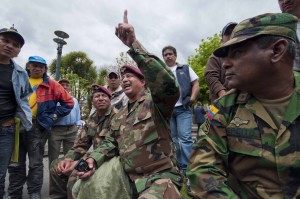 After 20 years, the memories of those who took certain decisions during the war with Peru in the area of Cenepa are still alive. Political, military and diplomatic actors recount the events that occurred between late 1994 and early 1995, which mark a historic chapter for Ecuador and the region.

It was in the government of Sixto Durán-Ballén, who upon taking office (1992) raised to his Peruvian counterpart, Alberto Fujimori, the need to direct the dialogue towards a solution of the bordering problem that had “more than a century and a half.”

Durán-Ballén, 73, now admits he ‘never’ thought that situation would lead to a war.

The key date was February 10, 1995, when fighter planes took off from the Taura Air Base (in Guayas) to the border area and demolished three ships.

The leader of this squad was Raúl Banderas, current head of the FAE and lieutenant-general, who says that the result was a “very serious blow to the Peruvian aviation,” which was better equipped, he admits.