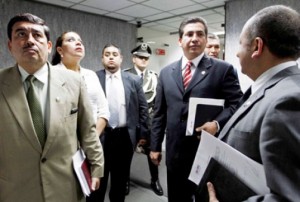 The Criminal Chamber of the National Court of Justice noted that they will not pronounce yet on the request of archiving the case against Roberto and William Isaías, former owners of Filanbanco, This, because the appeal resource is still pending.

Judges Gladys Teran, Jorge Blum and Lucy Blacio said: “Regarding the argument for the archiving request of syndicated Roberto Isaias, which lies in clarifying whether the embezzlement was repealed in 1978 or remained in force until 1998, it continued until March 12, 2014 and with the validity of the COIP is not a form of embezzlement, being a central issue (position in the foundation of appeal) precludes this Court of Cassation to show an approach now and / or comment on this, just in judgment, because the appeal presented is still in process … “.

The documment explains that the case file would correspond to the Attorney General’s Office.

Jorge Zavala, Isaías lawyer, said: “The Court answered that they will resolve this issue at the (appeal) hearing to be called … But they will have to solve it in favor, they have no choice, unless they invent something that would be of grievance before international courts”.