Chancellery is ratified in case Assange; the assembly asks for accounts 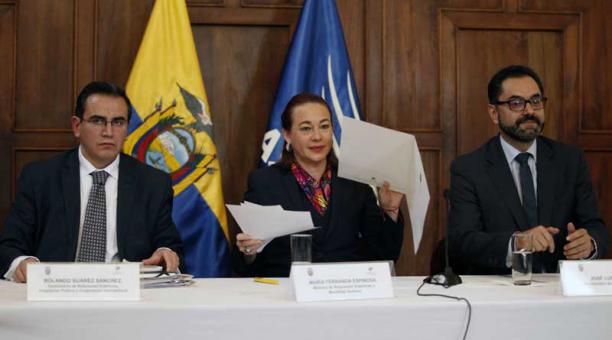 Legislators of the Creo movement, of SUMA and the PSC, request the appearance of Foreign Minister María Fernanda Espinosa to the Assembly. They want her to give an account of how the country’s foreign policy has been handled since she took office last May.

The PSC even mentioned that Espinosa should resign. What happened around Julián Assange, asylum in the Embassy of Ecuador in London, was the trigger. Guillermo Lasso, leader of Creo, sent this Thursday, January 11, 2018, a letter to the President of the Republic, Lenin Moreno.

In the letter he recalls that one of the objectives of international politics is to defend the dignity and interests of the nation. And that goal cannot be achieved by incorporating diplomatic representation “to a foreigner publicly challenged by the courts of Sweden, the United States and also the United Kingdom.” Espinosa confirmed that on December 20 the Foreign Ministry requested the United Kingdom to grant him the status of diplomatic agent at the Embassy in London.

But it was denied the next day. In addition, the morning of this Thursday recognized that on September 16, 2017 the founder of Wikileaks requested naturalization to the Government. And that this was granted on December 12 of the same year, under the considerations of the Constitution and the Mobility Law.

Guillermo Celi, from the SUMA caucus, believes that Assange has represented a problem for the country and that is why it is necessary for Espinosa to go to the National Assembly. “Explain what has been done and what is being done to solve that problem. After that you will see what decision you have to make. “For Henry Cucalón, of the PSC, what is happening is the result of continuing with the same foreign policy of the previous Government.

That is, tied to ideology. “If he had a minimum of respect for Ecuador, he should have left his office.” The also Assemblywoman of the PSC, Paola Vintimilla, already requested information about what happened with Assange to the Chancellery and the appearance of the Minister of Foreign Affairs. “We ask, first, that the Chancellor attend the International Relations Commission. And, on the other hand, explanations of his motivation to give citizenship to  Mr. Assange. What are the conditions for having been given citizenship other than having been in solitary confinement for five years? ” It is not the first controversy in which Espinosa has been involved since she assumed that institution. It was also criticized after the vote on Venezuela in the Organization of American States.

The Chancellor abstained and the Government ratified its position of not supporting the proposals that imply, in its opinion, interference. It also happened when, facing the same issue, Ecuador aligned itself with the Alba, while 17 other foreign ministers signed the Declaration of Lima, against the president of Venezuela, Nicolás Maduro.

The ex-chancellor Jose Ayala Lasso pointed out that in the list of errors of the Government there are also certain diplomatic appointments; like the attempt to send Alexis Mera to Washington and the location of Guillaume Long in Geneva, as representative to the UN.

And he found “few successes” in the appointments of former Foreign Minister Francisco Carrión as ambassador to the US, Diego Rivadeneira to Brazil and José Valencia to the OAS. In the factions of the officialism of the Assembly; Both the Morenista and the Correista, the issue has not yet been discussed. Until yesterday they did not have a position.

Similarly in the National Integration Bank (BIN). Wilma Andrade, coordinator of that group, spoke in a personal capacity. I have considered it disproportionate to request the resignation of the Minister of Foreign Affairs. For her, the way is to make a request for information so that the country knows what happened around the hacker Julian Assange. Former Foreign Minister Patricio Zuquilanda believes that in the face of what is happening with the Foreign Ministry, the President of the Republic could convene Foreign Affairs Advisory Board.

This instance includes all the ex-chancellors and could be a space that allows redirecting the Ecuadorian international policy. After hearing the news that Assange had an Ecuadorian identity number, the United States also answered the concerns of the local press.

“It is a decision of Ecuador and we will not talk about whether we are considering bringing it to the United States for a trial, we do not talk about what our actions are about, it’s something we will not discuss at this time,” said Under Secretary of State for Public Diplomacy Steve Goldstein.

Julian Assange took refuge in the Ecuadorian Embassy in London, in June 2012. Two months later, former President Rafael Correa gave him asylum. On May 24, Lenin Moreno assumed power and inherited the case. The Foreign Ministry defends its action. (I)