Change in the Navy after drug trafficking scandal 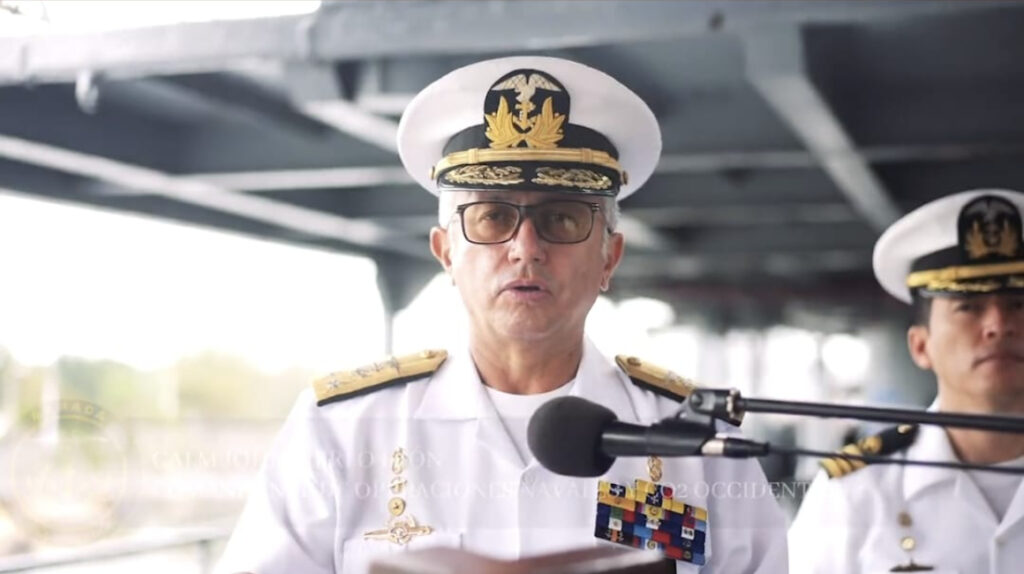 Message from John Merlo as Commander of Naval Operations, on July 1, 2022, in Guayaquil. Now, he was appointed as Commander General of the Ecuadorian Navy.

Article updated at 10:47 with more details of the new Commander and the situation of the Armed Forces .

President Guillermo Lasso makes changes in the National Navy, a few days after the scandal involving eight of its members , prosecuted for drug trafficking.

Lasso had ratified Vásquez in the changes in the military leadership , made in May 2022.

The new commander Merlo arrives at the institution when eight members of the Navy were prosecuted for an alleged sale of cocaine , which was hidden in the hold of a coast guard boat on Darwin Island, in the Galapagos archipelago.

The cocaine had been stolen from a previous seizure . On August 11, 2022, the same Navy and the Unit for the Fight against Organized Crime of the Police captured 28 bundles with 560 packets of cocaine 200 miles from Galapagos.

Subsequently, anti-narcotics police agents tracked down the eight marines who were part of the operation. Since they had kept one of the bags in which the packages of cocaine were stored.

Currently, the case is in the tax investigation stage . In this phase, the Prosecutor’s Office will collect the evidence to present at an intermediate hearing, which will be the preamble to a possible trial.

This case of the eight marines adds to an already complicated situation for the public force. At the beginning of the year, Michael J. Fitzpatrick, United States ambassador to Ecuador, spoke of the presence of ‘narco generals’ in Ecuador and the withdrawal of visas for police officers was confirmed.

In addition, on August 14, 2022, during an interview with Codigo Vidrio , the diplomat was asked about the withdrawal of the United States visa to 18 officers of the Armed Forces . Fitzpatrick neither confirmed nor denied this information.

However, a day later, Nelson Proaño, head of the Joint Command of the Armed Forces, assured that they have not officially received information about the revocation of their officers’ visas.

Merlo has 42 years of experience in the Navy. Until before his appointment, he served as Commander of Naval Operations and Head of the First Naval Zone, in Guayaquil, since May 2021.

In addition, the officer has a bachelor’s degree in naval science from the Rafael Morán Valverde Naval University. As well as a diploma in Strategic Foresight from the Higher Polytechnic School of the Army (ESPE).

Merlo’s military career began in 1980, when he graduated as a submarine officer. His resume also highlights his time as Commander of Naval Operations North, between 2017 and 2020.

During this time, he was also Chief of the Unified Command on the northern border and Commander of the Esmeraldas Joint Task Force . In other words, he was at the forefront of the crisis of violence that was experienced in that area of ​​the country in 2018 .

Between March and April of that year, four sailors were killed in an attack with explosives. And a team with three members of the newspaper El Comercio was kidnapped and killed by FARC dissidents.

Military clashed with irregular groups from Colombia, in Esmeraldas

Ecuadorian recycler produces energy with the garbage he collects