Cheme Suspended by FEF for 2 Years 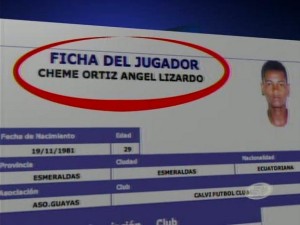 Since last night the player Gonzalo Chila Palma ceased to use the name he had been called for the last seven years. The striker of Liga de Quito is once again Angel Lizardo Cheme Ortiz, and with his old name came a sanction of two years of suspension by the Ecuadorian Soccer Federation (FEF) through the Disciplinary Commission.

Enrique Moreno, secretary of the soccer organization announced that the decision was made after three hours of deliberation. During that time, the report of Marco Vargas, head of the Investigation Commission for the FEF confirmed the usurpation of identity. Meanwhile Cheme was branded as a rebel since he didn’t assist to the meeting, because of this he would be able to appeal after fulfilling the 50% of his sentence.

Paulo Rodriguez, General Director of the Civil Registration, stated before a press conference that there was a change on the data of the system, incident that might have produced the felony.

According to the analysis the change of information occurred during the fourth renewal of Cheme ID in the offices of Quito. Because of this mix up someone is being investigated.