`Chespirito,´ in a delicate state of health 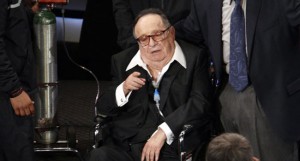 Chespirito is one of the most popular comedians in Latin America

The Mexican comedian Roberto Gómez Bolaños, better known as `Chespirito´ is in a delicate state of health. The Basta newspaper stated: `Mr. Roberto is in a serious condition but stable, doctors reported so, and already informed the family that there is any hope of recovery.´

The creator of `El Chavo del Ocho´ and `El Chapulin Colorado´, celebrated in Cancun his 85th birthday on February 21. Roberto Gómez Fernández, the artist’s son, told `The Universal´ of Mexico, that his father has respiratory problems and difficulty walking.

Chespirito, who was also a director, producer and writer, is one of the most popular comedians in Latin America.

Daughter of `Chespirito´ posts a picture of her father in Twitter