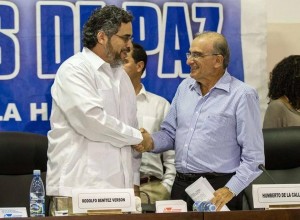 The head of the Colombian delegation Humberto de la Calle (r.) Shakes hands with Cuba diplomat Rodolfo Benitez, in May at Havana. AFP

The chief negotiator of the Government of Colombia in dialogues with FARC, Humberto de la Calle, said today that the surrender of arms by the guerrillas if a final agreement is reached “is an imperative” for that there is not “armed peace.”

“Colombians can be sure that the FARC did not keep their weapons if we reach an agreement (peace).

The disarmament is an imperative that should lead to there is not armed peace,” said De la Calle in a statement released this Sunday by closing the cycle 30 dialogues.

De la Calle insisted on noting that “once we sign a final agreement, the FARC must initiate the process to stop having weapons in their hands.”

The head of the negotiating team of the government of Juan Manuel Santos also recalled that the surrender of weapons “is a concept that applies solely to the armed groups outside the law” to which the State, through the Armed Forces “holds the legal monopoly of arms and the legitimate use of force.”