Chikungunya spreads out in 19 provinces of Ecuador 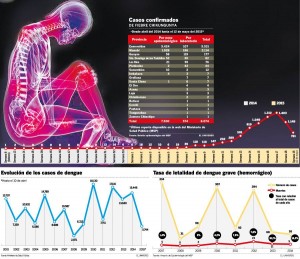 8,000 cases of chikungunya were reported last week according to the Minister of Health Carina Vance. In its latest accountability report, The National Service for Control of the Arthropod Vector-Borne Disease (SNEM for its Spanish acronym) indicates that the proliferation of the disease-transmitting mosquito in the country increased from 2013 to 2014.

Manabi and Esmeraldas are the provinces where the disease has proliferated on a larger scale and where 95% of cases of the new febrile syndrome concentrates. Some families of these sectors do not fumigate, so eliminating the vector is key to control both diseases.

In its report, the SNEM includes the application of the “Community Participation Project for the biological control of the Aedes aegypti,” which involves the delivery of biolarvicides to the families of eight cities with the highest incidence of dengue since 2012.

The plan included the purchase of the biological larvicide Bactivec to the Cuban company Labiofam for a total of $ 35’834.466,80. Finally, there are cases that are not recorded in official statistics because patients do not go to health centers. They prefer to avoid the long lines and the waiting.

The new music video of Iggy Azalea and Britney Spears

Raid in the Severance Fund´s seat