Chile enters into the last week of presidential campaign 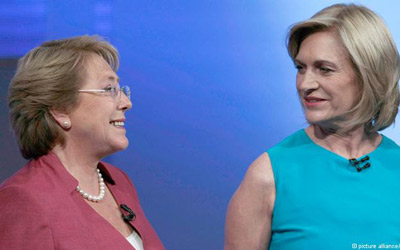 The two candidates for the Presidency of Chile,  Evelyn Matthei, Representative of the ruling party, and from the opposition party  Nueva Mayoria, Michelle Bachellet,  yesterday reinforced their presence on the streets of the capital with campaign events in which they requested the support of the citizens for next Sunday’s elections.

Both candidates developed various activities, eight days away of the second round of the elections in Chile. Bachelet held a “bike ride” in the capital of Providencia district, while Matthei carried out an activity door-to-door in Cerro Navia, a neighborhood Northwest of Santiago.

Bachelet and Matthei were the most voted in the first round, which took place on November 17.

Last Thursday, the two candidates held a debate organised by the Association of broadcasters of Chile.