Chilean government will repeal amnesty law adopted during the dictatorship 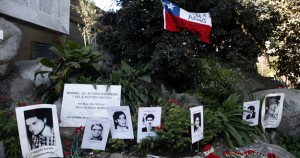 The Government of Chile will announce in the coming hours the repeal of a decree law appreved in the dictatorship of Augusto Pinochet, which grants impunity to the agents of the regime, as confirmed by official sources.

This decision, which coincides with the 41st anniversary of the military coup which overthrew the government of Salvador Allende, it will be publicly announced by the Ministers of Justice, José Antonio Gómez, and the Presidency, Ximena Rincón.

“The initiative not only seeks to repeal, annul the law but rather Amnesty for illegal, unlawful and by violating all international treaties,” said Senator Guido Girardi, the Party for Democracy (PPD, center left), one of the authors.

Justice Minister Jose Antonio Gomez said the measure does nothing but ratify what the Chilean courts have done so far: not applying the amnesty law.

The repeal of the amnesty law, which exempts from liability for abuses committed between 1973 and 1978, was one of the election promises of Michelle Bachelet.