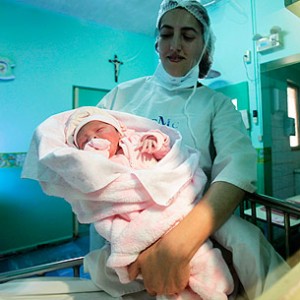 One of the 33 miners who are trapped in the deposit in Chile, Ariel Ticona, saw the birth of his third daughter, Esperanza, through a video sent by a probe to 700 feet deep to where they are, informed Alberto Iturra, psychologist in charge of the rescue labor.

“He saw the video. Everyone associated to him. Esperanza has been very well received.” Iturra told AFP. Christian, Ariel’s brother brought him the video of the birth of his daughter, a few hours after she was born. He could also speak to his brother for a few minutes.

The girl was going to be named Carolina, but Ariel asked his wife to name her Esperanza after the camp called “Campamento Esperanza” that’s built by the families of the miners nearby the San José deposit.

The miners have been trapped 700 mts. deep since August 5th, 2010. The rescue plan predicts they will be able to come out around November or December.