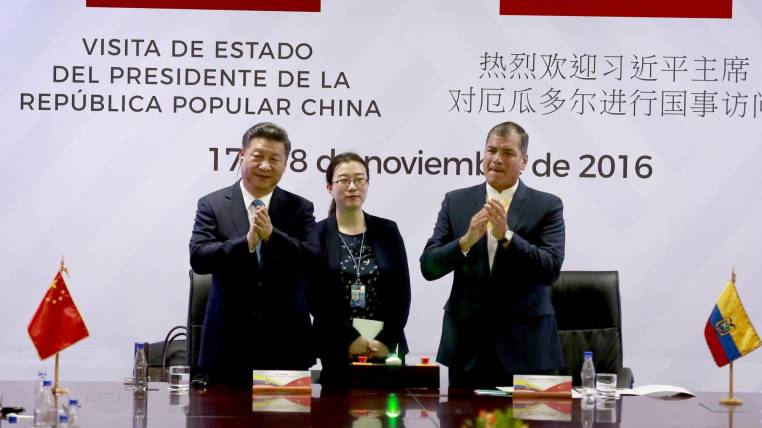 Another irregularity. The scope of China in the economic decisions of the country, during the government of Rafael Correa, was larger than thought. In one of the credits granted by the Development Bank of China (CBD), on April 29, 2016, the implementation of an office for the financial entity in Ecuador is ordered.

This office, according to documentation that EXPRESO agreed to, is jointly with the Ministry of Finance. That is, to obtain money from China, the country had to open a joint unit. The place would serve to “recommend eligible projects, recommend entities of the People’s Republic of China that do business with Ecuador, payment of contractors and subsequent management of the credit line”. The provision caught the attention of the Comptroller General of the State.

The office is part of the special examination that the control entity performs to the public debt contracted in the administration of Rafael Correa. Although it was during his term, the Comptroller did not notify the former president of that issue. He is part of the debt investigation by Executive Decree 1218 that he signed in October 2016 and that modified the registry of state commitments. That change, as reported by EXPRESO on Saturday, hid 11,326 million dollars from the balance sheets of the Undersecretary of Public Financing.

The surrogate controller, Pablo Celi, explained to the 11 veedores (observers) citizens that will monitor the examination of the debt, that the Comptroller did not obtain information from the joint office. Its location and financing were not disclosed to the entity. This newspaper consulted the Ministry of Finance in this regard. The agenda of Minister Carlos de la Torre, as explained by his communication team, made it difficult for the official to talk about it. Finance offered for this week a response on the scope of the joint site.

The concealment of information was not the only obstacle encountered by the Comptroller’s Office during the examination that will be presented in the last week of April. According to EXPRESO, the documentation files of public debt operations do not meet international parameters for proper registration. The debt files, which the Undersecretary of Public Financing of the Ministry of Finance has, are “incomplete, unnumbered, and not foliar”.

In addition, the information is not ordered chronologically or have indexes of content. The disorder of the financial area of the government made it difficult, according to the Comptroller’s Office, to analyze and apply the audit procedures. That is one of the limitations that will have the members of the exam oversight. Pablo Lucio Paredes, a former constituent assembly member, said that ordering and categorizing public financing and its sources is fundamental for Lenin Moreno’s government to know the way forward.

With whom and how much do you have to renegotiate? He asks. Reaching the goal of transparent debt, however, is even more complex. Comptroller Celi asked the Ministry of Finance for information on several debt contracts. The answer, from the Legal Coordination of Finance, was that three governmental resolutions of 2010 declared that information as “secret and reserved”. (I)

Police search in ecuadorian mountain a woman that disappeared in Cuzco