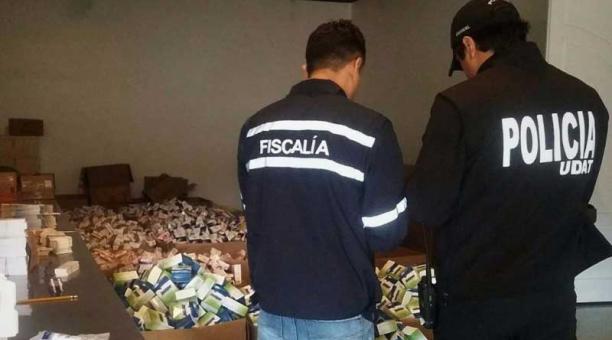 Police officers raided a house located in the center of Cuenca, in that place worked an importing company that brought medicines from China. Since the police raided those offices and the Agency for Regulation, Control and Sanitary Surveillance (Arcsa) withdrew its operating permits; the place became a bazaar.

Police officers still monitor these facilities, as they ensure that the importing company was a facade to set up a network that was dedicated to the production and distribution of counterfeit drugs. The company was established 15 years ago. It had permits to import medicines and sell them in pharmacies. Thus, it managed to dodge the Arcsa controls.

The routes and destinations where they delivered the medicines are: in the Amazon they went to Macas, Sucúa, Mendez, San Juan Bosco, etc. In the highlands, they were distributed in Quito, Cuenca, Azogues, Biblián, Loja, Ambato, Gualaceo, Paute and other towns. On the coast, they reached Guayaquil, Machala, Huaquillas, Pasaje, Puerto Bolivar, Santa Rosa and El Guabo.

On the outskirts of Cuenca, this company had a clandestine laboratory valued at USD 500 000. This illegal business generated profits between USD 60 000 and USD 100 000 per month. The Office of the Prosecutor investigates the properties of the owner of the company, who is free, although he must appear every week at the Attorney General’s Office. This Journal tried to contact him, but he refused. (I)

Returning migrants chained themselves in the Plaza Grande in Quito