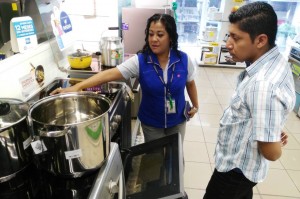 The upcoming sale of imported Chinese cuisines in the Ecuadorian market concerns domestic manufacturers of induction cookers. The Appliances Association of Ecuador (ALBE) ruled on the matter since the government said it would donate them to the beneficiaries of the Human Development Bond.

On Saturday, President Rafael Correa said that the stoves will arrive to the stores at a lower cost, and will include a set of pots.

Enrique Arosemena, manager of the Replacement Project of Liquefied Gas Oil for Electricity, revealed that kitchens with 4 ceramic hobs will be sold at $ 200, below the $ 203.30 cost, and kitchens with oven at $ 300, $ 13.30 less than the cost.

Market entry of this product, 50% less than the current options would have an involvement in the domestic industry, which is reflected in employment and tax payments, said Diego Malo, Fibroacero manager (ECOGAS).

Roberto Jouvin, MABE manager, pointed out that his $ 4 million investment would be at risk, “it is contradictory to imported. Why did they invite us to invest and produce? that is detrimental to the domestic industry,” he said. (I)

China, Colombia and the US, the major partners