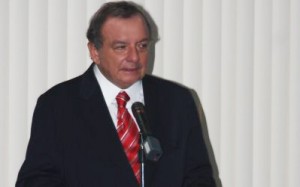 Today, December 24, Industrial Molinera, lead by  businessman Alvaro Noboa, performed their annual mass to commemorate the Christmas Eve. The event was followed by the preachers words on the birth of Christ and the love that mankind must express to each other.

During the mass the words of the preacher were accompanied by Christmas carols performed by several members of the Molinera Industry. Afterwards the Priest concluded the ceremony wishing the Noboa family a Merry Christmas.

After the ceremony, businessman Alvaro Noboa addressed all the members that attended the mass. Noboa stated that even when he is publicly attacked by the media, he still works for the well being of others. He also expressed his gratitude towards them since they are part of his family company too. On his speech Alvaro Noboa wished them all happy holidays and reassured that the success of the company lies in their effort too. Afterwards the Noboa family said goodbye to all the guests.

I am deeply proud of leading the most employment generating companies nowadays in the country. Despite all kinds the attacks: political, from our competitors, despite the great recession that we are experiencing today -both in Ecuador and in the world- these companies still provide employment, they continue to produce products that are exported to the whole world, they continue generating more jobs due to expansion processes -just like today in El Café, which is in expansion process- as in the continuously growing agriculture, that occurs in new businesses that are founded every year and keep contributing to this group of companies.

From these companies, the oldest one is more than my age, because when I was born -I am now 60 years- my dad was already a very important businessman and many of these companies were founded by him. And in this competitive world, the fact that a group of companies is still alive for more than 60 years it is just an extraordinary act. An act that requires exceptionally high levels of excellence, it requires a lot of persistence, intelligence, work, dedication, vision… everything that my father, you, and I have had in order to be alive and strong for 60 years and more.

I also want to say that this task, in order to be successful, can not go ahead with plans of 5, 10, 15 or 20 years. It goes ahead generating every week and every day wealth, product, quality, and efficiency. Efficiency is very necessary today, because the 20% of people on the world are unemployed. Only efficient people are those who are employed. Only efficient businesses are those that are open, the others are closed or have been swallowed by larger competitors as has occurred in many areas of international banking, as has occurred in many industrials areas, as has happened in many commercial areas.

Along with Noboa, which is a name that today is known worldwide, are only few companies in the international world that are still alive after 60 years. We have seen how General Motors is no longer there, and it was a symbol of efficiency, it was a symbol of production. It was a true example of what is called the American spirit. However is not there. Banks such as Lehman Brothers are no longer there. In Ecuador, thousands of companies have disappeared. Much more of them have been disappearing nowadays because we, the entrepreneurs, have governments that do not support us, in contrast, they often seek to chase those that generate production. That is why people who have a lot of time in businesses have a great merit as Gustavo Negrete. People who carry two generations or three generations here, as in the case of Miguel Macias, which is the grandson of the first executive that my father hired. My father had him first in a part-time job, after that he hired Miguel Macias’ grandfather in a part-time job too. And Miguel Jr. is already the third generation and he already has his fourth generation and he is already at a perfect age to have grandsons, but he still here, working, generating… And that is spirit of excellence. The spirit of feeling that this is for all of us, that only with great effort and intelligence of all of us, we will move forward these companies, after 60 years -“I will be alive and I will be 120 years if God helps me- at that time after 60 years a grandson of mine will be working with your grandchildren, and he will be giving this speech saying: “Go Noboa, we are going to succeed, we are going to win, we will move forward more businesses. Let’s correct the inefficiency on time.”

Many corrections have to be made, even today. The banana business field requires more efficiency since the competition is tough. On an international level this business requires more efficiency. On the coffee business I congratulate all of the officials, like Johnny, Bernardo and all of whom make El Café who are here because of the growth that keeps this business moving forward. The businesses of Molinera have also been efficient and the Poultier business is also moving forward. I want to congratulate all of you. I don’t want to get into any details, because all of you keep this conglomerate of companies alive. If one is good, the other is winning too; but if one is losing we have to correct that immediately so that it starts winning too. I congratulate those that have given great part of their lives here, like Ernesto Weisson, there are whole families working here. People like, Diogenes Villacis, who works with his father, his brother. Sylka Sanchez, who has his brothers working here, this proves that this is a family company, a family business. This is a business that has to be moving forward as if it were his own, because if this business goes down, our family goes down. It is not the business that goes down, the whole family goes down.

I hope Johnny’s daughters, Bernardo’s sons, Diogenes’ sons, Giannina’s sons, Nury’s children, and all the people who make this group of companies a great one; my nephews that are like my sons, Leonardo, Roberto Ponce, Mauricio Ponce… You are like my parents, my brothers… that is what you are to me… I hope all of you may be blessed by God. Merry Christmas to you.