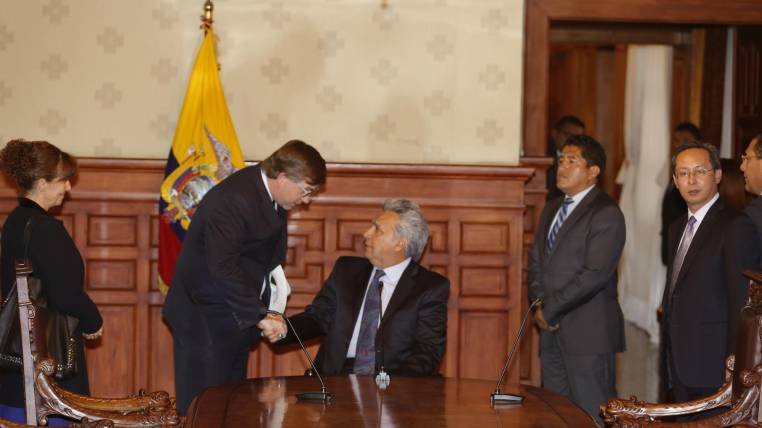 Not even the first blows are assimilated and a new one arrives. Interior Minister César Navas reported yesterday that a couple of Ecuadorians were kidnapped by the dissident group of the Revolutionary Armed Forces of Colombia (FARC) led by Walter Patricio Arizala Vernaza, aka Guacho.

The fact was confirmed on Monday night, when the Ecuadorian authorities received, via cell phone, a video as proof of life. The message came through the same channel that the criminals used to negotiate for the three members of the newspaper team of El Comercio, who were finally murdered and whose bodies cannot be recovered yet.

Yesterday, very early, Navas asked citizens to help identify the man and woman who appear guarded by two men in camouflage suits, their faces covered and armed. In a matter of a few hours it was known that it was Óscar Efrén Villacís Gómez (23 years old) and Katty Vanesa Velasco Pinargote (20 years old), from Santo Domingo de los Tsáchilas.

“Mr. President, you are being asked to please help us, to shake our hands, not to let what happened to journalists happen to us. We have children, we have family to go to see Ecuador; we have nothing to do with this war, please, Mr. President, give them what they want, we are simply citizens of Ecuador … “, we hear Villacís implore in a part of the video for almost a minute.

At the end of the meeting, it was learned that, as happened with the kidnapping of journalist Javier Ortega, photographer Paúl Rivas and driver Efraín Segarra, the data that the Ecuadorian authorities have about plagiarism are limited.

What is known is that Villacís and Velasco left Santo Domingo last Wednesday for the San Lorenzo canton. When were they kidnapped? “It is presumed that the kidnapping would be on Wednesday very late in the evening or on Thursday morning,” said Navas, who does not know if they are in Ecuadorian or Colombian territory, although in the audio they hear that they are asking to return to Ecuador .

As soon as the video became known and it became viral on social networks, the drama began for the relatives of the two plagiarized. A sister of the victim said that Katty and Oscar went to Esmeraldas at approximately 04:00 on April 11, allegedly to see the money from a motorcycle that he had sold and since then he could never speak directly with Katty.

The family member said that, through a message, she asked if they had reached their destination and she answered with a curt “yes”. “That was strange because it’s not the way she writes to me. I asked for a voice note or a photo, but there was nothing, “she said.

She suspects that it could have been someone else who wrote from her sister’s cell phone. This message and other indications are already in the hands of agents of the Police Anti-kidnapping Unit (Unase). Until noon yesterday, the plagiarists had not established another contact with the Ecuadorian police.

“We have no knowledge about what the demands are (of the kidnappers), we have 42 people detained from this organization, we have to refine the terms and how far we are going in these conversations,” Navas said.

Despite the acts of violence of the last three months, which have claimed the lives of seven people, including civilians and soldiers, and hold two captives, the Government insists that the problem is focused on the border strip with Colombia.

Therefore, the authorities acknowledged yesterday that both police and military are analyzing and structuring security regulations and that certain provisions will be issued in the next few hours for people visiting the towns along the border.

An SOS to five embassies

President Lenin Moreno yesterday summoned the ambassadors of China, the United States, France, Spain and the United Kingdom to dialogue and ask them for assistance in dealing with the conflict the country is experiencing on its border with Colombia.

At the end of the meeting, the president said that agreements were reached for these countries to equip Ecuador, mainly, with technologies that are used to confront terrorist organizations.

The president, at the end of March, accused his predecessor, Rafael Correa, of having dismantled the Armed Forces and National Police, which would have facilitated the permeability in the border area to bring the country to the present time.

“We are a country that at this moment requires unity in order to fight an invisible enemy but we can make it visible if we have the technology and knowledge of these countries,” said Moreno.

The United States Ambassador, Todd Chapman, said that his country is with Ecuador and will support the actions that President Moreno takes to fight the guerrilla dissidents who did not accept the peace process.

Relatives of the members of the journalism team of El Comercio received the news yesterday that the Government is open to an independent commission to analyze what happened with the three. The names of who will integrate it are analyzed.

Juan Carlos Raza, police chief of Santo Domingo de los Tsáchilas, said yesterday that intelligence personnel are providing all the support to the relatives of the two kidnapped and that, for their safety, they have permanent support.

The Binational Border Commission (Combifron) met yesterday in Esmeraldas. This mechanism seeks to intensify the exchange of intelligence and information between the public forces of Ecuador and Colombia. (I)

Recovery of bodies is the priority of Ecuador and Colombia

Escort of the President, arrested for links to drug trafficking