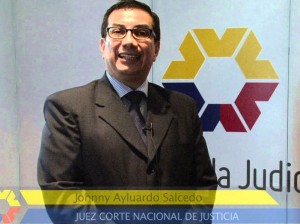 After absolving the process which condemned former lawmaker Mery Zamora to eight years in prison on charges of sabotage and terrorism, Johnny Ayluardo, Judge of the Criminal Chamber of the National Court of Justice (CNJ for its Spanish acronym) received the notification of the Council of the judiciary (CJ) on an investigation against him by the issued judgment.

The resolution of the CJ coincided with the statements of President Rafael Correa, who expressed his disagreement with Ayluardo’s decision.

Meanwhile, this action raised concern in the CNJ. Judges Jorge Blum, Mariana Yumbay and Lucy visited Blacio Ayluardo to show solidarity to him. Following this, the Judicature plenary met to address the issue.

The case was based on an alleged “inexcusable error” that was allegedly committed in the processing of another process which is unknown.