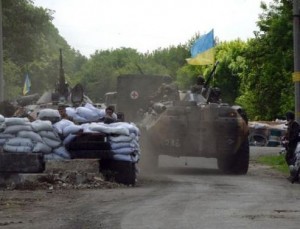 The Acting President of Ukraine Alexander Turchinov, reported this Thursday the death of at least 14 soldiers in combats during two attacks registered in the provinces of Donetsk and Lugansk, both self-proclaimed independent Kiev.

Thirteen of the fourteen casualties occurred near the town of Volnovaja, Turchinov stated at a meeting with members of the Ukrainian Council of Churches and Religious Organizations.

“Our military defended the city (Volnovaja) and prevented the advance (the pro-Russian militias.) But to our regret, our boys died for Ukraine,” said Turchinov.

Another Ukrainian military died in a battle near the town of Rubezhnoe, in the neighboring region of Lugansk according to the Government of Kiev.

In response, rebel authorities declared this Thursday a state of emergency throughout the province and the total mobilization of all men from 18 to 45 years, said Valeri Bolotov, leader of the self-proclaimed Republic of Lugansk.