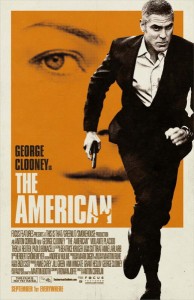 The American is the upcoming action drama thriller of George Clooney. The movie tells the story of a professional assassin hiding in Italy for his last assignment. Director Anton Corbijn a former photographer of music albums made his big screen debut in 2007 with the film “Control”. The Guardin a British newspaper said: “the best film of the year: a tender, bleakly funny…”.

Corbijn seems to be taking a lot of material from Martin Booth novel “A Very Private Gentleman” in which the film is based. Jack is George´s caracter, a private man who doesn´t make friends since they have a tendency to die around him.  After the appearence of an unknown girlfriend, Jack goes into hiding in a mountainside Italian village called Abruzzo.

Jack´s handler gives him a new contract and Clooney´s character has to manufacture a high power rifle for a mysterious female assassin. However everything changes when the assassin falls in love with Violante Placido´s character, Clara an Italian beauty, and starts losing his head. The film centers on the adventures of Jack a his passionate life style allowing the audience to connect more with the character.

The local priest suspects of Jack´s true nature, father Benedetto tells him “any man can be Rich if he has God in his heart”, to which Jack replies “I don´t think God is very interesting to me.” Ultimately Jack finds redemption in the loving care of Clara which is the theme that makes the movie.

During the movie, the audience will feel how Clooney´s character changes his empty existence. After living with the label of a lone gunslinger, silent killer andmany more, this professional recognizes it is time to leave behind the path of blood and death that has exacted a toll on his spirit.

A film with a plot  that is very rare to find and more importantly it leads the audience into an air of mystery and let the fans thinking what is going on. The screen play by Rowan Jeff feels like it was made for the Directors desire to make a good film. The movie promises different views and angles of life and George Clooney´s portrayal of a professional hitman starting to have feelings is very encouraging.