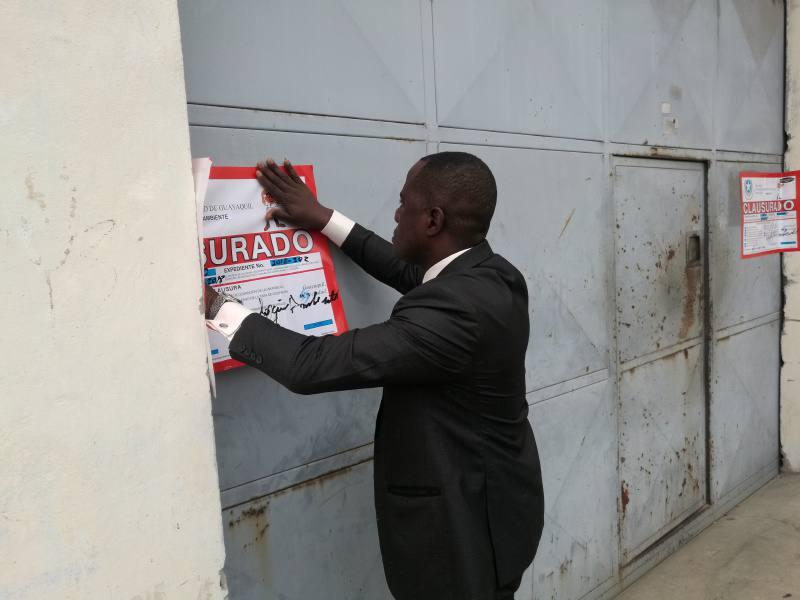 A week after the closing of the bottling of drinks Tesalia, three other companies were suspended yesterday morning in an operation carried out by the Environmental Directorate of the Municipality of Guayaquil, in the sector Mapasingue west, in the north.

The suspended companies are Corona Furniture, Kotch Plastics, and Calvi, the latter is a seafood packinghouse.

The first two were sanctioned for failure to comply with the deadlines for environmental regulation, according to the report of the Environment Department

Bolívar Coloma, director of said entity, explained that one of the companies has been notified since 2017 to present their corresponding environmental licenses, but this has not happened.

He indicated that the control actions became stricter with the companies that have “potential to cause affectations” to the areas of influence of the Salado estuary.

The third company was closed following a bypass of water discharges that was out of the norm, the official added.

This discovery was made after a technical review by personnel of the Environment Department and a laboratory that provides services to the municipal entity.

“The fines apply based on the administrative procedures regulated both in the ordinances and in the Law of Environmental Management, and in the event that the breaches persist, it will be officialized to the police station that also acts under the charge of environmental crime,” Coloma said. .

As for the bottling company Tesalia, last Monday it was lifted the closure after six days of inactivity, after submitting commitments on the management of wastewater to the Directorate of Environment, said sources from that municipal entity.

The company was closed after residual discharges were found without treatment in its vicinity.

This newspaper has requested information from representatives of Tesalia, but until the closing of this edition no response has been obtained.

Coloma said that there are 200 companies intervened and that in the coming months are expected results of evaluation of their treatment plants. He pointed out that along with the fines, companies are also subject to administrative sanctions, such as the suspension of the operating permit.

Otoniel Quintero, environmental commissioner, explained that the operations were due to the monitoring of the companies closed, but not because of any citizen complaint.

According to data from the Municipal Environment Department, from May until yesterday, 32 administrative processes have been opened to companies that pollute the Salado estuary and the Guayas River due to the management of their wastewater

There are 475 companies that have the potential to cause damage to the Salado, according to the municipal entity. (I)