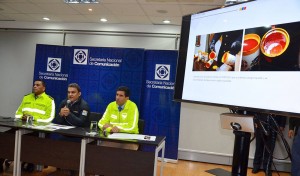 The alleged leader of the narco-criminal organization that sent liquid drug to Milan in the diplomatic pouch in 2012, Gerardo MC, alias “el Zambo,” was captured thanks to an informant who availed himself of the Rewards Plan.

“We received information from a citizen who said ‘I know what is the identity the Zambo is using and where he is living.’ That source lead us to him and received his reward,” said Jose Serrano, Minister of the Interior, in a radio interview in Quito.

The clue that was missing came from Sucumbios, the Narcotics Police carried out the apprehension in Guayaquil of Gabriel R.Q. and Mary L.M., who would have associated with five other people who already serve sentences in Italy for the same case, including the cultural manager Christian L.

The minister also said that any official of the Chancellery is linked to the case, and that the further basis that this is true are the 5000 interception minutes sent by the International Criminal Assistance to Ecuadorian authorities for investigation.