CNE has defined the campaign budget ceiling for sectional elections 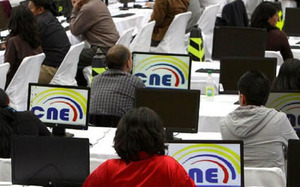 According to the rules adopted by the Assembly of National Electoral Council (CNE), candidates for mayor may spend (in their particular funds) to $ 0.20 for the promotion of elections conducted outside media, while applicants for prefects will have up to $ 0.15.

This amount is obtained after multiplying that amount of money by the number of voters: 1,869,851 and 2,865,082, respectively, according to the preliminary voter registration.

The regulation of electoral promotion in printed media, radio, television and billboards states that the hiring of these services will be in the hands of the CNE, it is forbidden to be done directly by political subjects.

The CNE will promote government plans advertisement and expenses will be supported by the state through an electoral promotion fund.