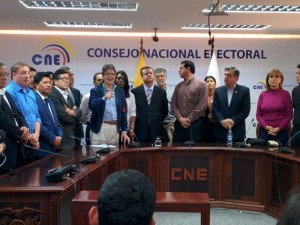 The National Electoral Council (CNE for its Spanish acronym) is examining whether there should be a prior constitutional control to the request of forms for signatures for the referendum proposed by Sociedad Patriótica and Compromiso Ecuador about indefinite reelection.

The legal coordination of the CNE since last week began analyzing Sections 99, 100 and 102 of the Constitutional Control Act to determine whether the two proposals involve amendments or reforms. If so, before beginning to collect signatures, it must be submitted to the Constitutional Court.

The agency has until later this month to issue a non-binding report to the plenary.

Andrés Páez (CREO) on this, indicated that the issues raised by Compromiso Ecuador is not an amendment, but a consultation. The question they want to ask is: “Do you agree that the Constitution be amended to allow indefinite re-election?”

Meanwhile, Assemblyman from SP, Gilmar Gutierrez, admits that the proposals made by the organization are amendments to the Constitution; The first relates to the presidential election, and the second arises to change the composition of the current Electoral Council.