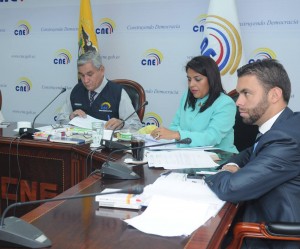 The plenary of the National Electoral Council (CNE) enlists the new regulations to appoint the seven new members of the Board of Citizen Participation and Social Control (CPC).

On March 18, 2015, seven members shall leave office in compliance with the Constitution and the Law of Citizen Participation Council, determining that in five years the agency must be renewed.

Before calling to a contest, election directors must convene the integration of a citizen oversight to monitor the election. This announcement has not yet been made and there is still “no date for any of the procedures,” said Magdala Villacis.

Inside the organism, the calendar for the contest and the rules and instructions are tuned. “There have been meetings with advisors (from the CNE) in which they have worked on this, but it is still not finished” says the member of the Organism.

He noted that the regulations that the transient CNE developed, led by Omar Simon, would not be used. “These will be taken as a base, but it has to be upgraded, improved and that is being developed”, he said.

Villacis said that applicants would need clear rules on issues such as the valuation of its certificates.