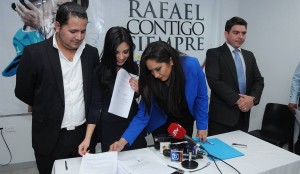 The members integrating the group “Rafael contigo siempre” (“Rafael we are always with you” translated into English), were happy when the Constitutional Court accepted the procedures of their petition – presented this past February 11th – in which they request a referendum that that will allow the current Ecuadorian President, Rafael Correa, to launch his reelection candidacy.

Pamela Aguirre, one of the group spokeswoman, pointed that according to their calculations, there is still enough time to gather signatures and establish a Consultation before the inscription is closed, around the end of next year’s February.

Aguirre estimated that the Constitutional Court will emit a favorable ruling this April or May; between June and August, the group will collect the signatures, in which the CNE, the Ecuadorian Electoral Council, will have to verify them and summon a referendum on September. (I)