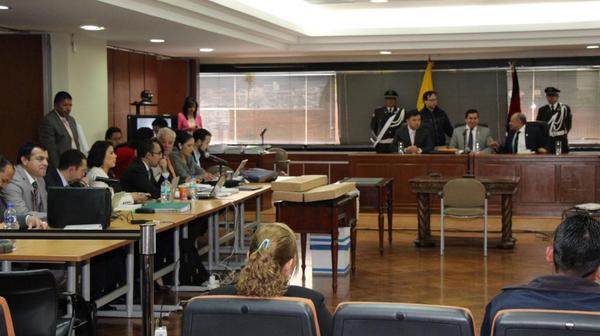 The National Court of Justice (CNJ for its Spanish acronym) announced on Thursday November 6 its opinion in the case called ‘Las Dolores’; it sentenced 5 defendants to 16 years imprisonment, 5 others for two years due to cover-up(although the sentence was suspended), and an innocent.

Those sentenced to 16 years of special rigorous imprisonment are: Erick S. and Héctor F. for the crime of murder; Ricardo LL., Douglas S. Y. and Luis S. as responsible perpetrators of murder. They will serve their sentence in the Cotopaxi Rehabilitation Center.

In the case of the Former Police General Jorge Poveda, the Prosecutor’s office abstained from indicting and the court upheld his innocence; the Former Prosecutor Carlos P. was declared accesory after the murder and sentenced to two years in prison, but the favorability  was applied and there is no penalty (because there is not crime for which he was tried with the previous Criminal Code).

Darwin C., Marco S., Marcos V. and Darwin S., were declared accomplices for modifying the crime scene, and did not receive penalty for the application of the favorability figure.

Furthermore, the court ruled that the case will no longer be called ‘Las Dolores’ and will be known henceforth as ‘González and others.’

The Attorney General Galo Chiriboga was satisfied with the judgment and said that is a day of jubilation for the Ecuadorian justice.