Cocoa exports fell 14% because of pests 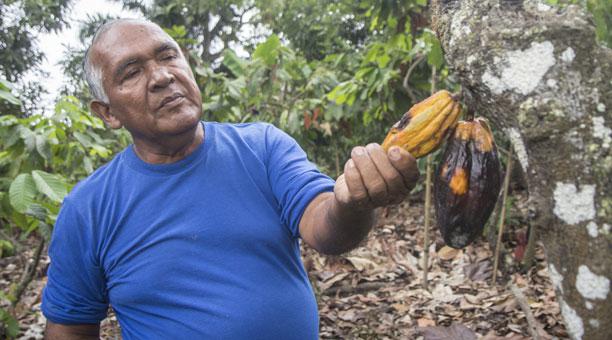 The appearance of the Monilla, which had an outbreak at the beginning of las year´s second semester, may be related to climate change. Freddy Cabello, head of the Union of Cocoa Countrymen Organizations of Ecuador (UNOCACE), explained that the diseases that have prevented the fruit to develop came along with the low temperatures.

Cocoa normally needs a temperature of 19 degrees Celsius for an optimum performance, but when cold arrives, the plant gets sick. The coastal provinces are the most affected, mainly Guayas, Los Ríos, El Oro and Manabi; also a part of Santo Domingo de los Tsáchilas.

The disease has caused low production of Ecuadorian cocoa. In UNOCACE, which counts with 927 producers in 4000 ha, a drop of 45% in productivity has been recorded this year. “We used to produce 1 200 tonnes, but now only arrived at 700 tons,” said Cabello. This affected exports.

According to ciphers from the National Association of Cocoa Exporters (Anecacao) in the first seven months of this year, the country exported about 20 000 tonnes less compared to the same period last year. This meant a decline of 14% in the volume sold abroad and a loss of $ 46 million for the sector. Juan Pablo Zuniga, Anecacao´s president, foresees that the volume of foreign sales will drop 20% to the end of the year, leaving a loss of USD 150 million.