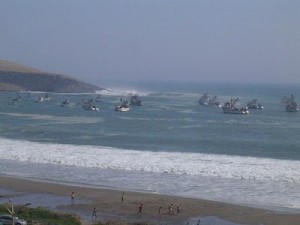 The low temperature of the sea has created a shortage of fish in the usual areas. Fishermen are concerned about this, since it’s the most important port of the Peninsula. Last year the negotiated 10 bushels of fish dorado, an average weight of one thousand pounds a day. According to Ramon Gonzalez, President of the Fishermen Cooperative of the Salinas sector.

Other fishermen are also experiencing a shortage of fish since the cold waters have exiled most of the big fishes, now they are collecting small ones. The Cold Current of Humboldt has produced a cold wave in the Coast, a beginning to the La Niña phenomenon.

Gonzalez informed that most of the big species are at 120 miles off shore, this demands more resources from the fishermen and few go that far now, thus decreasing the number of boats that leave to far waters, generating a lack of employment.

The Santa Rosa fishermen own around 1.200 ships and used to earn $400 per journey. Now everything has changed even the fishing style, instead of nets they use fishing hooks since the fishes roam deeper.

The shortage of fishes has decreased the production of 400 ships, which has left over 1.200 fishermen without a job. The labour is poorly paid; the pound of dorado is sold in 70 cents, a few years back it was sold on 90 cents.

Fishermen state that in a good day they used to round up over 100 fish of picudo, albacora, botella, but now this quantity has diminished by half and the fishing days are longer, which means the spend more of what they earn.

The low temperatures of the Peninsular Coasts affect the consumer market, in the Caraguay plaza of Guayaquil the pound of picudo and corvina rose 50 cents on the last week and in some markets the pound of several fishes has a price that surpasses the $4. Merchants complain about this since they used to pay around $400 for 200 pounds of picudo and corvina, last Tuesday the price rose to $560.

Most of the Guayaquil plazas sell the picudo pound at $3,50, on Portoviejo the same amount is sold at $4.