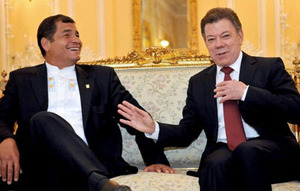 After signing agreements to strengthen six axes of action and with the opening of the extension of the international bridge Rumichaca. The bilateral meeting between the presidents of Colombia, Juan Manuel Santos, and Ecuador, Rafael Correa ended yesterday.

The leaders met with government ministers of both nations, for nearly four hours to analyze the development and fulfillment of the commitments made in December 2012 in the first binational cabinet. Actions to improve the quality of life for residents of the border were also proposed.

The leader of the Ecuadorian regime maintained that the meeting was to discuss the six axes, infrastructure and connectivity, security and defense, economy and trade, environmental issues, social issues and cultural hub. On border security it was said that they have already identified the irregular procedures and decisions are going to be made to regulate them.

Correa said, “in the economic-commercial axis we have great challenges. In Colombia we have one of the two largest deficits (trade). The first is with Chile. But in terms of the relative size of the Colombian economy is the biggest deficit and we should work to try to balance bilateral trade.”

During the trip to the northern border, the President presented the new long-range aircraft Falcon 7X , acquired by the State for the service of the President and other government bodies.