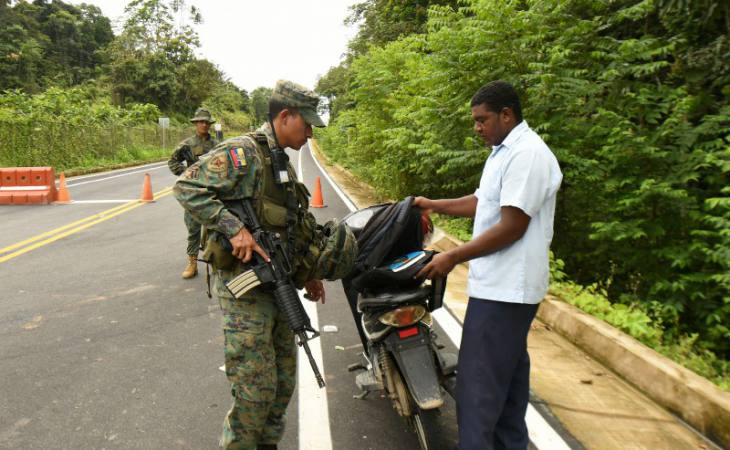 The narco-terrorist attack that last Saturday caused 95% damage to the Police Command of San Lorenzo, in Esmeraldas, as well as in 37 neighboring houses and left 28 injured, has a guilty since yesterday, according to the Colombian prosecutor, Néstor Martínez, corroborated by the Ecuadorian Minister of Defense, Patricio Zambrano.

This is Walter Patricio Arízala Vernaza alias Guacho, a dissident of the demobilized FARC guerrilla, born in the Esmeralda town of Limones, and whom Colombian authorities attributed last October to the murder of six civilians in Tumaco, a Colombian town bordering Ecuador. .

“(The bomb) is associated with a binational fight against criminal organizations, in this case with a FARC dissident of Ecuadorian origin, aka Guacho, who used our border to try to have impunity in Colombia against serious crimes  and throughout the southern area of Nariño, trying to take refuge, “said Prosecutor Martinez, who yesterday participated in Quito in an international meeting on domain extinction.

“Ecuador is impacting that criminal organization and apparently all this may be associated precisely with the actions of the two countries in the fight against crime,” the prosecutor added.

Earlier, in an interview on the state channel Ecuador TV, he already anticipated that behind the placement of the car bomb that exploded outside the Police Command of San Lorenzo was a dissident group of the FARC. “We see reprisals by certain residual groups of the Colombian guerrilla linked to drug trafficking,” he said.

The FARC signed a peace agreement with the Colombian government in November 2016. Its members concentrated in centers of reincorporation into civilian life, but almost half, as in La Carmelita, Putumayo, in front of Sucumbíos, has left those places without known destinations.

From one of those centers, in Nariño, Guacho would have left and would now operate with 55 men in the border area with Ecuador, which is a drug trafficking corridor. Regarding the attack in San Lorenzo and the involvement of a dissident group of the FARC in the incident, the ex-commander of the Navy, Aland Molestina, who was also commander of Operaciones Norte during 2005 and 2006, stated that it should be analyzed that “the Government He always tried to reduce the Armed Forces, arguing that the border problems were over “, this despite the fact that, according to him, he warned that the scenario was difficult because drug trafficking was something latent.

Molestina said he hopes that Ecuador and Colombia take concrete steps to strengthen security on the border and achieve good results, but ensures that if corruption in justice, as happened in his time, does not end, there will be no significant achievements.

Colombian prosecutor Néstor Martínez revealed yesterday that in Ecuador, a hundred property belonging to the FARC has been identified as real estate, motor vehicles and cattle for around 15 million dollars.

This statement was made yesterday in Quito, during the international meeting of domain extinction, as a mechanism to fight against corruption and organized crime. Delegations from Latin American countries attended.

‘Guacho’, merchant who joined the FARC

Recognized as an expert in explosives, presumed leader of logistics in drug mobilization between Colombia and Ecuador, and as the main dissident of the peace process between the FARC and the Colombian Government, in the south of that country.

This is how Colombian media describe the Ecuadorian Walter Patricio Arízala Vernaza, alias Guacho, who is designated by the Prosecutor’s Office of the neighboring country as the alleged author of a car bomb explosion last Saturday at the police station in San Lorenzo.

He was a merchant from his native Limones, in the Eloy Alfaro border canton, and would have been part of the Daniel Aldana column of the FARC. After leaving that guerrilla group, he formed a group of 55 men with interference in Mataje, Vallenato, Puerto Rico and Mira River, according to Colombian media. The so-called dissident would also be the author of the attack that left 6 dead and 50 injured in the Puerto Rico settlement in Tumaco. There, according to the Colombian Army, five bombs were fired at uniformed and civilians protesting in favor of illicit crops.

In a note yesterday from Noticias Caracol it is detailed that local intelligence revealed that he would have illicit drug crops and laboratories with the help of former members of the FARC. Both Ecuadorian and Colombian police have received reprisals from these groups. In a detachment of Tumaco, subjects opened fire on the weekend. These acts would be for the latest seizures of drugs. (I)