Colombian army continues the search of the general captured by FARC 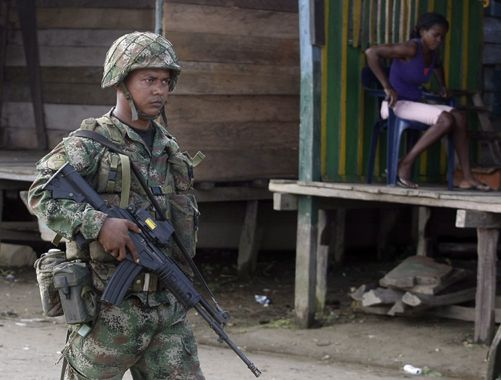 The search of the general prisoner of the FARC in Colombia continues this Wednesday, with the hope of an early release that allows to relaunch the peace process with the communist guerrillas, suspended at meeting two years of its opening this Wednesday.

Some 1,500 troops plus helicopters, airplanes, boats and other vehicles, were deployed in a vast and remote area of Chocó (west).

At this place, Brigadier General Ruben Alzate and two others were captured on Sunday by guerrilla members of the Revolutionary Armed Forces of Colombia (FARC, communists).

“The operations will continue in Chocó until it is necessary,” said Defense Minister Juan Carlos Pinzon, who yesterday moved to the area by order of Colombian President Juan Manuel Santos, to coordinate the field work of the military .

Pinzon also flew over the jungle area where the military operation is concentrated, which he directs along with military leaders from the headquarters of the 15th Brigade of the Army in Quibdo, the capital of Chocó.

Alzate’s abduction prompted the suspension of peace talks with the FARC, installed on November 19, 2012 in Havana without a ceasefire in Colombia.