Colombian Refugees are Victims of Abuse in Ecuador 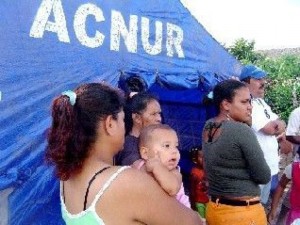 Conflicts in Colombia have provoked several refugees to cross the Ecuadorian frontier in order to find peace. Due to the Colombian Government’s announcements regarding the intensification of armed combat against FARC, the Refugees United Nations High Commissioner pointed out the refuge requests have increased to 1.000 per day during the past months.

A UN report on the state of world population 2010 indicated that women and female children refugees in Ecuador live in precarious conditions. The UNHCR said 52,000 Colombians have settled in the country, half of them are women and little girls who are trying to escape from violence in their country, however, they have been victims of physical and sexual abuse in Ecuador.

In addition, they are victims of domestic and gender violence, they also have to hear chauvinistic insults from local authorities. These factors deprive Colombians from living the quiet life they hoped to have before crossing the border; according to Deborah Elizondo (the UNHCR representative in Ecuador) they cannot rent a house or develop their own businesses to support their families.

Jorge Parra, representative of the UN Population Fund (UNFPA) in Ecuador, said there are many problems affecting the rights of women, including rape, HIV infection threatening and consequently psychological trauma. He added that female children can’t go to school because of the threat of violence (kidnapping), this violates their education right.

Some Colombian women go to Frente de Mujeres de Sucumbíos, where they are provided training and support to have their own Business—such as selling food and clothing manufacture—.”We don’t discriminate them, we support them because they are often single women, their husbands are dead or missing in Colombia,” said Rosa Lopez, president of the organization.