Command of the Armed Forces requests to go to the Assembly 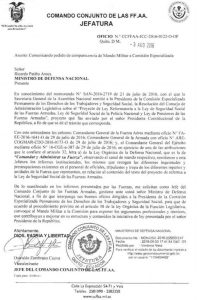 Last Wednesday, when the analysis of the bill proposed by President Rafael Correa began at that commission, head of Comaco Oswaldo Zambrano signed a document asking Defense Minister Ricardo Patino “to address his perfect letters to the president of the Commission” (Mallerly Vasconez), in order to convene the military command, “and expose professional and technical arguments that contribute to improving its structure and content.”

Zambrano contended that the commanders of the three forces: the Army, the Navy and the Air Force, whose mission is to “command and administer their strength,” according to the Law of National Defense, therefore, they addressed institutional reports to the Comaco containing the “different anxieties and concerns that exist among officers, crew members and troops.”