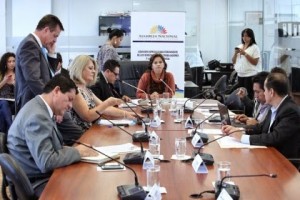 The Committee on Rights of Workers received yesterday the two observations made by the Executive power to the Reform Act that seeks to transfer 54 funds to the Bank of the Ecuadorian Institute of Social Security (Biess).

The main objection made by the President concerns the appointment of a co-manager by the “Super” (Superintendency) of Banking while audits last, as raised by the Assembly. The Executive indicated that this would mean that the “Super” is, at the same time, the one that controls and the controlled, so he suggested appointing a receiver and not a co-manager.

The second is to remove paragraph 21 of Article 12 of the Biess Law, so the entity could manage the funds resources.

Betty Carrillo, President of the Commission, said that the report was already submitted to the President of the Assembly, Gabriela Rivadeneira, and possibly is finally approved in the plenary session next week.