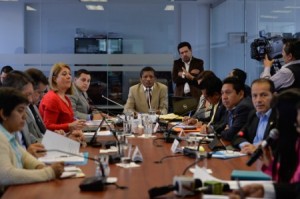 Since last week the Commission of Workers and Social Security of the National Assembly dedicates work shifts for the development of regulations and the definition of sanctions to prevent the malpractice of Section 58 of the Law on Public Service (LOSEP).

This section is a reference for occasional service contracts within the public institutions. The section sets guidelines to recruit staff  and “meet institutional needs, following the report of the unity of administration of human resources, provided that there is the budget and availability of economic resources.”

It also indicates that these contracts will last 12 months or until the completion of the remainder of the current fiscal year. It also adds that in case of institutional need “it will be renewed for one time up to an additional 12 months except in the case of positions in investment projects or on the scale of the superior level.”

Assemblywoman Marllely Vásconez proposed an interpretative law for Section 58, which seeks for the occasional contract to be up to two years and if the need persist it shall become permanent. For this, the respective merit and opposition competition will be called and the highest rated will fill the vacancy.

Meanwhile, in the Commission on the Rights of Workers, there is consensus that Section 58 is clear and does not warrant reform, the problem for them would lie in its application.

New port and ZEDE will be located in Posorja