Commission of Worker´s Rights meets with entrepreneurs in Guayaquil 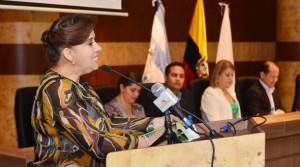 The Commission of Worker´s Rights of the National Assembly met yesterday with entrepreneurs and self-employed in Guayaquil, in the First National Meeting of Business and Human Resource Managers. Opinions and proposals were submitted for the draft Labour Code, that would be presented in late October.

One of the issues that caused more interest was the unionization of workers by industry. The draft states the employees of companies “engaged in the same sector of activity, located within the national territory” will be able to form unions by sectors.

Other points mentioned were the monthly allocation of the third and fourth tenths salaries, responsibilities limits for close workers and labor guarantees for self-employed workers.

Chevron Case will be submitted at the Human Rights Council