Commission will discuss veto to the Telecommunications Law 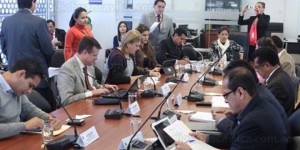 The Commission of Autonomous Governments will analyze on January 21 the partial veto to the Telecommunications Law submitted by the Executive branch. The session is scheduled at 17:00. This was confirmed by Assemblyman Angel Vilema (AP), who is Vice President of the Commission.

Among the objections, the Executive branch establishes 35% of subscribers as a rate of customers concentration to generate a payment to the State. The assembly members had been initially approved a rate of 30%.

Article 116 is also clarified, because according to veto, the law allowed that a defendant can be tried several times for the same offense. The veto makes clear that there are several entities that can judge the actions and two penalties shall not beset up for the same conduct.

Former President Gutierrez called for unity in the Armed Forces