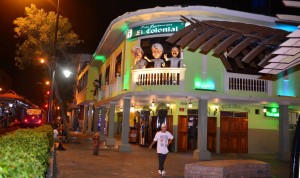 The owners of the club-restaurant El Colonial, located in the Zona Rosa of Guayaquil, have ratified they will continue the complaint filed in the Prosecution against the police commissioner and a political activist for an alleged extortion on the reopening of the establishment, which was closed for a month.

Maria Jose Salinas, daughter of the owners of the business, alleges in her complaint that an activist who belongs to the ruling party was demanding $ 6,000 to reopen the establishment. Commissioner Rafael Guerra is linked in the complaint.

El Colonial, that has over 30 years of operation, had been closed on November 27, after an operation of the Municipality in which a firearm was found behind the cash register. The owners argued it was an obsolete relic.

The complainant says that she contacted Governor Julio Cesar Quinonez to expose the extortion she was getting from M.C., an alleged militant of Alianza PAIS. Salinas has audios and WhatsApp screen captures as evidence.